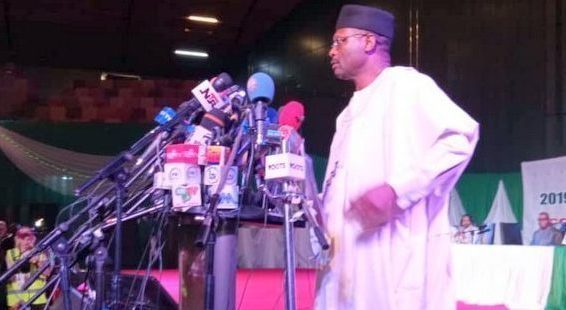 Barely two days to the gubernatorial and state house of assembly elections, three directors and some ad-hoc staff of the Independent National Electoral Commission (INEC) have been busted after they received bribes in Uyo, the Akwa Ibom State capital.
Also caught in the scandal are members of the National Youth Service Corpse (NYSC) engaged by INEC for the forthcoming polls.

An ad-hoc staff of the commission, who gave the information in exchange for anonymity, told this newspaper, bribes were dished out in dollars for officials to compromise the results of the elections.
The source said the directors from the INEC headquarters were in the state on a mission to mobilise local government and ward e-collation officers to support a particular candidate and political party during the election.

According to the source, an influential politician in the state invited them to a compound near the office of the Niger Delta Development Commission (NDDC) in Ewet Housing Estate, Uyo.

At the meeting, the source said an aide to the politician allegedly shared $1, 000 to each of the ad-hoc staff, adding the senior staff got far higher amount of the bribe.
“We were invited to a compound near the NDDC office in Ewet Housing Estate and an aide of a gubernatorial candidate in the state disbursed $1, 000 to each of us who are e-collation officers and ward collation officers,” the source said.

“During the meeting, which took place on Wednesday night, we were asked to support the party during Saturday’s governorship and house of assembly elections.”
The source gave the names of the directors simply as Moses, Paschal and Mba, adding many local and ward e-collation officers attended the meeting and were paid.
When contacted, the Resident Electoral Commissioner (REC), Mike Igini, confirmed that a report was received that staff of the commission were compromised by a prominent politician in the state.

“I never received any correspondence from Abuja to the effect that some of our officers were sent to the state on any kind of assignment,” he said.

“However, we have received a report that some of our officials and ad-hoc staff were invited for a meeting somewhere in Uyo and were offered money.

“We are investigating the issue and will send an appropriate report to our headquarters soon.
“I had promised that only the will of the people of Akwa Ibom will prevail in all the elections that will be conducted in the state and I am reiterating that in case some politicians are still in doubt.

“I cannot be bought with money because my needs are so limited. Just like the previous election, all election materials will be delivered at every polling unit and inspected by party agents before voting commences.
“Every political party and candidate will be given equal opportunity and I appeal to them to mobilise their supporters to be at the polling units to cast their votes peacefully.

“We are committed to conducting free, fair and credible elections in the state and nothing will undermine our resolve,” he said.

INEC’s National Commissioner and Chairman, Information and Voter Education Committee, Festus Okoye, told our correspondent he has not been around for the past three days and cannot confirm whether any senior staff was sent to Akwa Ibom.

“I have not been around for three days and so I cannot tell you anything until I get to the office tomorrow,” Mr. Okoye said.