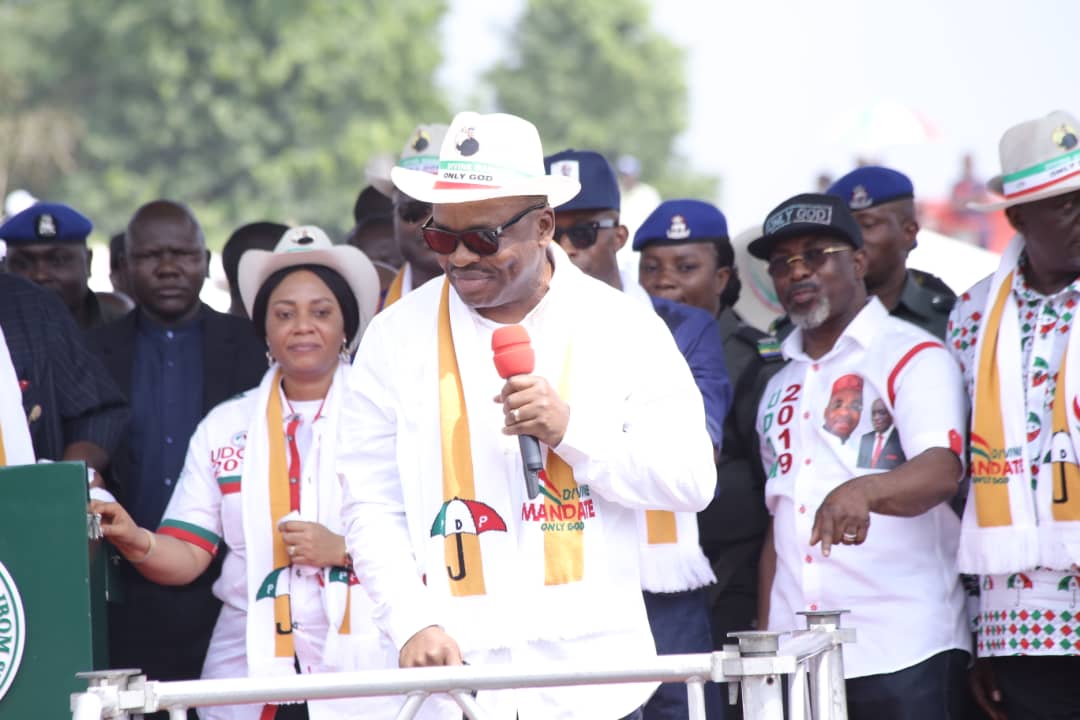 Akwa Ibom State Governor, Mr. Udom Emmanuel, has flagged off his campaign in Uyo and presented his 2019 manifesto christened “Completion Agenda,” for the collective peace and prosperity of Akwa Ibom people.

Speaking at the event today in Uyo, Governor Emmanuel noted that the 8-point completion agenda, which bothers on Industrialization, Aviation Development, Rural & Riverine Area Development, Small & Medium Scale Enterprise, Infrastructure, Security, Agriculture and Human Capacity Development, will aggressively industrialize the state and create jobs for Akwa Ibom people, thereby ensuring peace and prosperity for all, as it is the most effective and realistic document for good governance.

He stated that the manifesto of Completion Agenda surpasses superior performance and promises to turn Akwa Ibom State into one of the most industrial states in Nigeria, and that his first term industrialization drive would over-driven during his second term, as his commitment to industrialization, youth employment, peace, security and property, and to provide environment for small & medium scale enterprises is irrevocable.

The Governor reassured and reaffirmed his faith and believe in the Completion Agenda, and explained that “Three and a half years ago, we anchored our blueprint on a five-point agenda. Today, we have taken stock of what we have done well. From power sector to health sector, education, industrialization, economic development, inclusion, youth & women empowerments, poverty alleviation and security.”

He said every good manifesto must have promises that are measurable. “In the face of economic recession, in the face where the international community did not believe we were still existing in Nigeria due to bad news of insecurity, the whole world can testify that there is still good thing coming out of Bethlehem. There is something good coming out of Nigeria, there is a good state coming out of Nigeria, there is a governor out of Nigeria and there are people out of Nigeria that the entire world can trust no matter the propaganda and lies. Akwa Ibom people are not traitors but people of integrity and proven character who love one another and build the unity of the state.”

Speaking further, Governor Emmanuel expressed worry how people would build monuments and called it projects, stressing that there is a difference between monuments and projects, and that he did not come to complete monuments but to complete projects – economic life-touching projects.

“The same people promised 31 industries but could not do even one. Within three years, we have come out with an exceptional scorecard because we are playing politics of development. With a global market value of over $2.76 billion, Cassava is the most important tropical root crop. We are positioning Akwa Ibom State to become a major exporter and tap into the global trade. The best internal substation in the city has been commissioned and put to use in the state.”

Earlier in his tone setting, former Military Governor of the state, Air Commodore, Otuekong Idongesit Nkanga, noted nobody can change what God has destined, saying that it is time to choose between darkness and light, good and evil, and Udom Emmanuel represents light and good.

He charged all citizens of the state to stand firm for Udom Emmanuel because only him can fulfill the industrialization promises, adding that if Akwa Ibom State develops, Nigeria will develop.

In his remarks, Governor Henry Seriake Dickson of Bayelsa State stated that Mr Udom Emmanuel is not just a performing Governor of Akwa Ibom State but also in the entire South-South geopolitical zone.

He urged Akwa Ibom people to hold firm good product they have in Governor Emmanuel by ensuring that they vote massively to return the Governor for second term for an opportunity to consolidate on good governance, assuring that Akwa Ibom will win in the forthcoming election just as Bayelsa State won against the so-called Federal might.

Also speaking in his goodwill message, Speaker of the Akwa Ibom State House of Assembly, Rt. Hon. Barr. Onofiok Luke, expressed appreciation to God for what He has done for the re-election of Governor Udom Emmanuel whom he described as a performing, industrialist, and financial manager, and that Nigeria had decided to intimidate and oppress him since August 2018, but the hand of God Almighty is upon the Governor.

Highpoints of the event were presentation of flags to all PDP candidates both returning and serving members of the National and State Assemblies; and reception of 5000 defectors from the All Progressives Congress (APC) to the PDP led by former Speaker of the Akwa Ibom State House of Assembly, Barr. Ignatius Edet.

Speaking after the reception, Mr. Ema Joseph, former Chairman of Chairmen, Positive Change Organization of John J. Udoedehe, stated that for more than 10 years that he has been in APC, members were killed and kidnapped during the dark days of Senator Godswill Akpabio.

He decried that if over five people could lost their lives in a mere primaries, if Nsima Ekere takes over as Governor, two months later, he will start his second term agenda , and anyone who opposes him will be killed in minutes.

The event, which took place at the Uyo Township Stadium on Wednesday, was well graced by all traditional institutions including paramount rulers, clan head, village heads, as well as commissioners, board chairmen, and other top government functionaries.