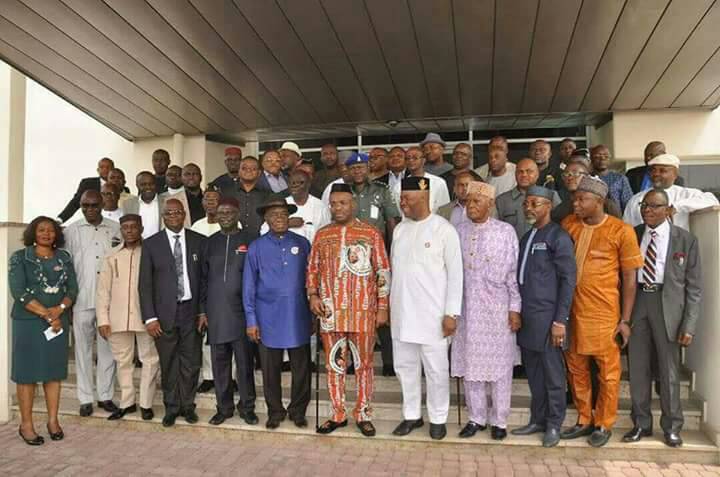 One of the striking and kenspeckle features of the Udom Emmanuel led administration in Akwa Ibom State is the uncanny disposition to even distribution of projects in the state. Every senatorial district, federal constituency, local government, ward and family has a testimony or two to attest to in this era of superior performance. Since 2015, life touching projects in the state have been clearly and equitably prioritized irrespective of geographical slants, ethnic zones or tribal algebra.

Ikot Ekpene Senatorial District like her two other sister districts have richly benefitted from the midas touch of the economic tsar at the helm of affairs in the state. Navigating through a turbulent national economic climate and depressing economic recession with tangible results is indeed no mean feat, even for the most intelligent leader. There have indeed been eye-catching fruits of good governance for the people of Akwa Ibom North West Senatorial District.

In infrastructure, Governor Emmanuel has impacted very positively in the geopolitical axis. The 6.41km Nto Edino Ekwereazu road with two 45 metres span bridges had since been commissioned. The project had looked like an impossibility given its swampy terrain and impenetrable topography. Today, indigenous contractor, Seyang Limited, led by son of the soil Engr Samuel Inyang has made the success story a matter of history. The 4.6km College of Arts and Science road, Nung Ukim in Ikono LGA has also been completed. Handled by Hensek Integrated Services, the road is tastily finished with side and outfall drains.

That’s not all, work has advanced greatly on the 14.1km Odoro Ikpe-Ikpe Ikot Nkon-Obotme-Arochukwu road with 110km bridge in Ini LGA. The project is executed through the Alternative Project Funding Approach (APFA) and indeed Peculiar Concerns limited is doing a great job. Work is also ongoing on the 23.25km Ikot Ekaide-Ikot Okoro-Ikot Ibritam road in Oruk Anam LGA under APFA plus the 18.95km Ikot Ibritam-Ekeffe-Ikot Akpan Afaha road with a bridge also in Oruk Anam and Ukanafun LGAs. To consolidate road infrastructure in the axis, Governor Udom Emmanuel is also constructing the Abak-Nsekhe-Ikot AkpaNkuk-Ikot Etim-Ikot Ikara(Phase 3, Section A), ie Ikot Ikara to Ikot Ibritam.

5.1 km length of internal roads are wearing a new look at the Akwa Ibom State University, Obio Akpa, handled by JP Sigma, not forgetting the 4.95km Ibesit Okpokoro/Ikot Ibritam roads. Governor Udom Emmanuel is currently dualizing 25 kilometres of the Uyo-Ikot Ekpene road handled by Julius Berger. After several months of contending with court cases and issues arising from payment of compensation, the project is alive and advancing in speed. The total length of the Uyo-Ikot Ekpene road is 50kms and crosses Uyo, Itu, Ibiono, Ikono, Essien Udim, and Ikot Ekpene LGAs.

To ensure the economic viability of the district, Governor Udom Emmanuel is committing billions of naira into the 14th storey Four Points by Sheraton Hotel, located in the raffia city of Ikot Ekpene. The facility, which has a total of 146 guest rooms, banquet halls, meeting rooms, spa, indoor and outdoor restaurants, swimming pool, tennis courts, club lounges, roof terraces, fitness centres,etc will strenghten the hospitality sector in Akwa Ibom State.

On May 23,2017, Model Girls Secondary School, Ikot Ekan, Abak was added to the number of schools in Akwa Ibom State. His Excellency Governor Udom Emmanuel commissioned the school, and gave assurance that, the school will commence admissions for full academic operations with boarding facilities. The school had since commenced in September 2017. Governor Emmanuel’s burning passion for education and bequeathing quality learning in the sector, inspired him to pick up the school, which was hitherto overtaken by weeds and reptiles to complete, after the natives of Ikot Ekang, drew government’s attention to the project. Currently, the school has administrative blocks, first class boarding facilities, including 240 beds, a dining hall with 400 chairs and ten class rooms.

Government’s intervention in the education sector has also extended to the tertiary institutions. At the Akwa Ibom State University, Obio Akpa campus of the University, six major projects have been commissioned by the governor. They include a digital language library, a commercial farm palm oil mill, a commercial farm feeds mill, vegetable screen house, ultra modern Mass Communication studios and a standard performance arts theatre.

Schools in Ikot Ekpene senatorial district are part of the 1401 public primary, secondary and technical schools and four tertiary institutions in the state receiving great attention. In addition to setting up ICT laboratories in some of the public and private schools in the state, Governor Emmanuel has not wavered in funding the free and compulsory education programme, which gives every child of school age resident in Akwa Ibom, regardless of state of origin, access to qualitative education from primary to senior secondary school level.

Healthcare delivery in the North West zone of the state is smooth. The General Hospital in Ikono today wears a new look as Governor Udom Emmanuel continues to revolutionize primary and secondary health care facilities in the state.

Agriculture in the zone is receiving a firm attention with increased investment in the cultivation of cocoa and the rice fields in Ini LGA. Farmers in Ikot Ekpene Senatorial zone would not count fertilizer as one of their problems from May this year, as the State’s automated fertilizer blending plant will come on stream. The fertilizer plant is sited in Abak Local Government Area after a formidable team of extension workers was formed to get feedback on challenges and needs of farmers through their various zones and cells.

Power in Akwa Ibom State has tremendously improved with the increased generation of power by Ibom Power Company and the building of injector sub-stations across the state. Ikot Ekpene Senatorial zone will also get theirs as construction and installation is ongoing to boost agriculture and small scale industries.

Through the pet project of Her Excellency, Mrs Martha Udom Emmanuel, lives are being touched, innumerable to count. One unique example is that of Mr Uwem Nnah of Ikot Udoe in Ikot Ekpene LGA, a widower with five children. Nnah’s story is heart rending as he was subjected to all forms of abuse and dejections coupled with the harsh economic climate. Today, he is a proud owner of a well furnished two bedroom bungalow. Mrs Glory Obot of Obot Akara, Mrs Inemesit Emmanuel Charles of Oruk Anam and several others have been blessed with new and well furnished homes. This does not exclude free medical outreach in the three senatorial districts of the state, interest free loans, business support grants to market men and women, empowering the girl child for self reliance and change

Space would not allow to enumerate what Governor Udom Emmanuel and wife are doing for the women, the homeless, weak and vulnerable. But, it is trite that the state government runs eight homes with over 700 children in its care.

Even in politics, Governor Udom Emmanuel has found in sons and daughters of Ikot Ekpene Senatorial district the capacity and trust to work with in the journey to growth and development. This is in line with his political inclusion agenda and a means to reach out to the citizens, empower and touch lives. Notably are the Deputy Governor, Mr Moses Ekpo, MFR, Secretary to the State Government, Sir Etekamba Umoren, Barr Uwemedimo Nwoko, Attorney-General/Commissioner Ministry of Justice, Professor Victor Inoka , Hon. Commissioner, Ministry of Education, Prof Nse Udo Essien on. Commissioner, Ministry of Science & Technology, Dr Glory Emmanuel Edet, Hon. Commissioner, Ministry of Women Affairs and Social Welfare, Mr Monday Ebong Uko, Hon. Commissioner, Ministry of Youths & Sports, Mr Ibanga Akpabio, Ministry of Labour, Productivity and Manpower Planning, Mrs Ekemini David Umoh, Special Adviser, Bureau of Rural Development & Cooperative. There are several others on different boards and commissions, agencies, technical committees, departments and units, all serving as aides and interpreting the superior performance agenda. For his special love for the people of the zone, he stood with the National Legal Adviser of the PDP, Barr Emmanuel Enoidem and ensured that he got elected at the just concluded National Convention of the party.

There are obviously expectations but the passion on the part of leadership is right. Governor Udom Emmanuel has displayed sufficient honesty and commitment to deliver good governance, even in the face of dwindling resources and increasing demands. Like the songwriter, the people of Ikot Ekpene Senatorial District have declared faith in the capacity and savvy of Mr Udom Emmanuel, their son and in-law to get the job done and move the zone further. They have said it is well. Once the passion is Right, nothing is impossible!

Finbarr is a public Affairs Analyst

RE: OPEN LETTER TO THE BOARD CHAIRMAN AND SHAREHOLDERS OF JULIUS BERGER PLC