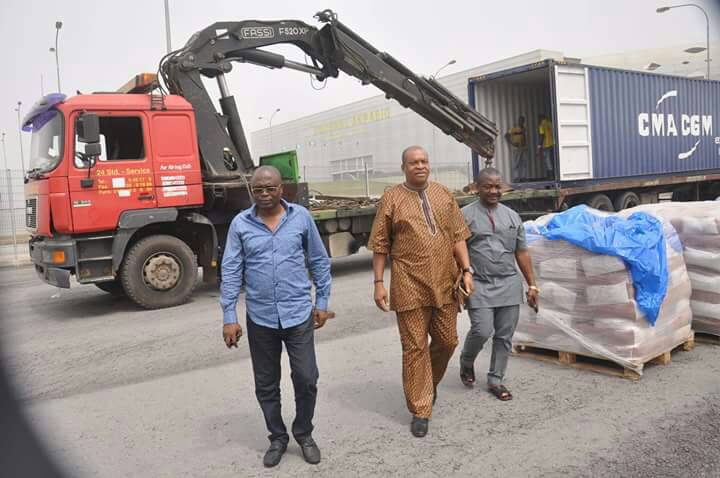 In keeping to his promise of delivering world class sports facilities across the State, Governor Udom Emmanuel has taken delivery of several containers of sports equipment imported from Europe.

The Eket Stadium, which was constructed in 1994 by the administration of Colonel (Retired) Yakubu Bako, is in a deplorable and an unusable state while the Uyo Stadium is currently not befitting of hosting reputable football matches.
It would be recalled that on July 4, 2017, while conducting Journalists round Eket Township Stadium, Mr. Uko had revealed that Governor Udom Emmanuel has given approval for the reconstruction of Eket and Uyo Township Stadia.

Governor Udom Emmanuel, who was recently bestowed with the Most Sports-friendly Governor in Nigeria Award, has been credited with leading an unmatched sports revolution in the country occasioned by several eye-catching recent achievements.

In an interview at the Nest of Champions, the Commissioner said, ‘Governor Udom Emmanuel had, sometime ago, approved the reconstruction of Eket Township Stadium, Eket and the renovation of Uyo Township Stadium, Uyo’.

‘These are some of the equipment which ordered from abroad’. ‘The administration of Governor Udom Emmanuel is not just delivering sports facilities to Akwa Ibom people but facilities which measure up with what is obtainable in other climes’, the Commissioner said.

He added that playing surfaces at the two Stadia will be laid with Astro Turf so as to offer an alternative to the natural grass at the Nest of Champions. ‘I thank the Governor for applying the highest level of financial engineering in the face of the prevalent economic situation of the Country as epitomized in his prudent management of available funds to deliver world-class democracy deliverables to the people of the State’, Mr. Uko posited.

The Commissioner, who spent several hours to personally supervise the offload of equipment, said that the move became necessary so as to reduce the burden on the Nest of Champions and to aid the springing up of sports facilities in other parts of the State.

Mr. Uko used the occasion to hint that the remaining nine sports centres in the other nine federal constituencies of the State, other than Itu/Ibiono-Ibom, as promised by the Governor, were still in the offing for Akwa Ibom people.

The Commissioner, who is also the State Sports Council Chairman, urged Akwa Ibom youths to take advantage of these facilities in their localities to harness their God-given talents.
Some of the equipment received include, Tartan Tracks granules, Astro Turf, Stadium Seats, Flood Lights, Goal Posts and many others.

Also present to receive the equipment were the Permanent Secretary of the Ministry of Youth and Sports, Coach Aniedi Dickson as well as the Director of Sports, Coach Lawrence Iquaibom.